The series offers the three initial "dude" characters in new looks, as well as a new character, Asher. Four versions of the characters are available with a single look for each.

Four more of the twelve main Hairdorables characters are included with no repeats from the earlier release, and again released in looks exclusive to the series; they are visible in the packaging, while the HairDUDEables are hidden. Each girl comes with her "BFF," or a specific 'Dude Doll:

None of the characters are Rare or Ultra Rare.

The packaging is the same as the prior series, with colors more similar to the Series Three coloring of blue, with newly styled packaging. The exclusive Hairdorables character will be visible to the side, packaged the same as Series One.

The packaging on the Dudes side is very much similar to Series Three with a diagonal pull open. The checklist is tucked with the background. A fourth packaging for the boy dolls, M4, is to accommodate the curled upstyle of Servin' Logan. Signature cards only show the character and name in script. The two stands are translucent but no longer match each other in color. 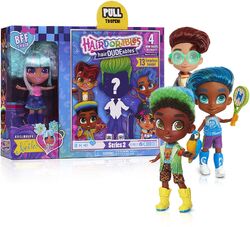 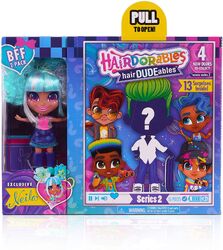 Each of the Four main Hairdorables character comes in a single, exclusive to the line look.