The series was released in late August to Early September 2019 and retails for $6.99.

The series expands on the main characters' pets, who are the same molds and shapes as their Series One looks with no change in shapes, rooting, or molds but with a "shimmer"--metallic accents and a pearly sparkle throughout the lightly translucent color of the bodies.

No brushes are included; each pet now has three accessories instead. Adoption Cards now list Naptime Standard and Favorite Activity along with the blank Adoption Date, but no pictures.

Each pet will come in two unique colors; unlike Series One, each pet is given a unique name for each look. Lemon also has an ultra rare version (marked with the standard star), Late Night Lemon while all the others are of standard distribution, making for a total of twenty-five variations.

The box is similar to Pets Series One, but matches colors with Series Two in that the packaging is pink themed. The surprises and pet are now in pink plastic bags.

The packaging surprises are generally in this order if opened as directed: Tag Stickers/one Accessory, Two Accessories/Photo sticker, Pet with Adoption Card. 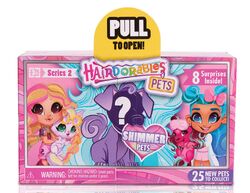 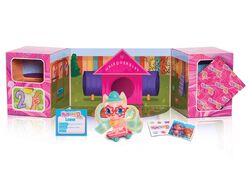 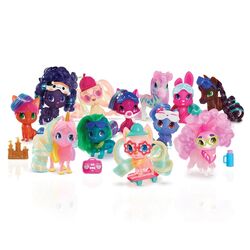