Series Five: Hair Art is the fifth release of the Hairdorables main characters.

The series offers all-new looks and hairstyles for the now-fifteen main characters, with twenty-six looks. The trait is that they now all have an alligator style hair clip with their name molded in raised dot letters, with unique designs printed along the length of the extension.

There are two internal lines with thirteen looks each; across the lines, each of the main characters is included at least once, but no more than twice. The internal lines are:

A Rare for Emily and one Ultra Rare version for Kat are included.

The packaging is again in a plastic reusable storage case shaped like Noah with her hair flowing around her, similar to Series Four. Now she has two distinct looks:

The cases are either magenta or purple internally (as per base color at the top of Noah's hair) with the background attached inside. There is a blue braid-molded handle on the top.

The package opens to show the package for the doll with So 90's Noah and After School Emily on the front, as well as the plastic bags tucked aside the doll package and below in the sections. When the package is emptied, there is a cut and tucked background and three storage sections below. The four surprise bags are the same as the prior series. The stands are transparent colored plastic and come disassembled with the stand in one of the packages. Each color is specific to sublines by color:

Backdrops align with the theme of the character subline, including Rares, and are cut to fit in the back of the package.

Kat's #1 has an exclusive background of a sports field. 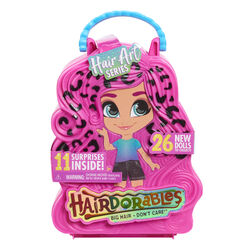