Series One is the first release of the Hairdorables main characters.

The series was released initially in August 2018 at Target, Walmart, and through Amazon, at a retail cost of approximately US $12.99.

The series introduces the twelve main characters, each in three unique looks for a total of thirty-six dolls. Each doll's variations include at least one Signature Look.

Two Rares of Neila and Bella and one Ultra Rare of Rayne are included; the others are of standard distribution.

The purple-styled box is sealed over the pull tab with thick clear plastic. (Second wave packages have different cover pull plastic and were also surrounded around with a second strip of clear shrink wrap plastic). Removing the plastic cover releases the Collector List if pulled out. The front tab peels down the front to open the package, showing the randomized background and sealed surprises.

The surprises are numbered 1-4 behind perforated cardboard flaps, with the doll behind the left side under a sealed flap and a "warning" to open the doll last. Behind each numbered flap is a plastic bin; they all are held in place by a plastic divider.

Each "bin" is sealed with a peel off plastic cover, each with variant hair puns and/or images of the characters. The fourth bin is slightly larger than the other three to accommodate larger accessories.

The doll and signature card are together in the sealed rectangular package, with the signature card behind the doll. There are four styles of doll packaging, each to accommodate styles;

Starting in a third micro-wave, a plastic saddle stand was also included and taped to the bottom back of the doll's package.

The following are randomized across regular finds and Rares: 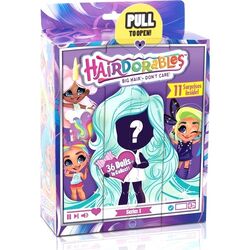 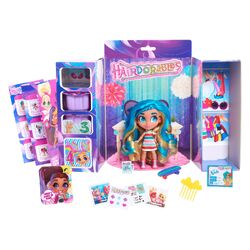