The series offer all-new looks and hairstyles for the twelve main characters, with thirty-nine looks across the twelve characters. A new face design, the Kissy/Pouty face, was introduced, with pursed lips; several dolls also include freckles.

Each doll's variations include a Signature Look that is, for the first time, separated on the checklist from the other lines; every character receives one. Three internal sub-lines have nine looks across selected characters; not all dolls receive every look, other than the Signature looks (as that would calculate to forty-eight dolls). Nine characters are selected for each interior line. Internal sub-series to the line are:

Noah, as the main character of the line, is in every interior line, as are Sallee and Willow.

Each doll includes a unique hairstyling implement--an oversized curling iron, crimper, or hair-coloring brush--and a clip-in hair clip extension. With the curling iron or crimper, the extension has "memory" fibers that will hold shape when styled with the tool and eventually relaxes. Hair-coloring brushes, with water, change the color of the extension via thermochromatic means; when icy-cold water is applied or subjected to cold temperatures, the fibers will change colors. The extensions will revert to standard colors with warm water or once the item warms back up to room temperature. The Color/Crimp/Curl actions are only on the hair extensions. The distribution means every doll comes in at least one variant of Color, Crimp, or Curl.

Rares for Noah and Skylar and one Ultra Rare version for Brit are included. Signature Cards now include Bedtime Routine, Favorite Flower, and Signature Dance Move.

The packaging is the same size as standard series packaging and dominantly blue. The packaging has changed to open on a diagonal pull before being pulled open. On the left is the flat backdrop that drops down and contains pop-out elements and on the right are the accessory packages and doll, now all behind perforated cardboard flaps. Unlike Series Two which still showed Sk8r Noah on the doll seal, this one now shows OOTD Noah. Bins are replaced with overall print plastic bags, in the style of Pets. No combs are included. The stands are now translucent and specific to sublines by color:

The doll and signature card are together in the sealed rectangular doll package, with the card behind the doll. The packaging has been slightly modified at the bottom to allow purchasers to pull the package from the inner box.

Eleven surprises are in each package. The stand initially came tucked to the bottom back of the doll's package; later, it was packaged disassembled with base loose in one section and the stand either loose with it or in one of the surprise packs. The packaged reveal surprises in various orders, but come as packaged: Shoes/Series Sticker, Accessory/Sticker, Hair Extension Clip/Sticker, Hair Tool, Dressed Doll with Signature Card and Stand.

Backdrops have been changed to have pop-up elements. Backgrounds are no longer randomized; they align with the theme of the character subline, including Rares.

Brit as an Ultra Rare has a unique metallic ski resort background. 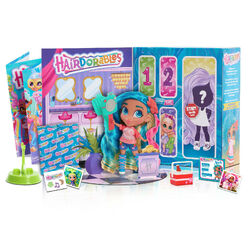 Italicized with ♦ are Rare Versions. Bolded with ★ are Ultra Rare Versions.
# are Crimp Styles. @ are Curl Styles. & are Color Change.

All Characters have a new signature look; they are listed together with ♥.