Series Two: Color Change is the second release of the Hairdorables main characters.

The series was released in January 2019 at a retail cost of approximately US $12.99.

The series offers new hairstyles and looks for the twelve main characters. Each character has one new Signature Look and one additional look. Harmony has an additional Rare version and Willow an additional Ultra Rare version; the others are of standard distribution. There are a total of twenty-six dolls across the series.

Each doll includes one color-change accessory[1][2] that, when placed in icy-cold water or subjected to cold temperatures, will change colors via thermochromatic means. The item's appearance will revert to standard looks with warm water or once the item warms back up to room temperature.

Starting in Series Two, the included combs were randomized instead of being matched to the characters; the same character can have two styles of combs, or the same comb can appear with two different dolls. Stands are included for all characters but no character has a specifically unique stand; colors, however, match a doll's looks. Signature Cards now include the characters' birthday, favorite hairstyle, and Pet's Name.

The packaging is similar to Series One packaging, with the same general style of packaging and opening style; the boxes and inner containers are dominantly pink. The packages are fully wrapped around with shrink-wrapped plastic, rather than the plastic bands of Series One; the hanger for shelving is attached to the shrink wrap. The front tab peels down the front to open the package, showing the randomized background, Collector List tucked against the backdrop, and sealed surprises with numbered punch flaps. The plastic sectional on the numbered reveals has been replaced with integrated cardstock separators.

There are new styles of doll packaging to accommodate styles;

The randomized stand comes tucked to the bottom back of the doll's package.

The packaged reveal surprises in this order if opened as directed: Comb/Glittery Sticker, Shoes, Accessory, Accessory, Doll with Signature Card, and Stand. A standard color-Change instruction slip is included with the color change accessory. Other containers--frequently #2 and #3--include a random Photo Sticker.

The following are randomized across regular finds and the Rare:

Sea Willow as an Ultra Rare has a unique metallic seaside background. 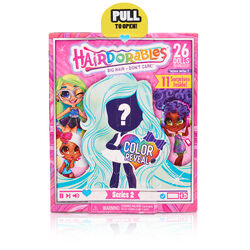 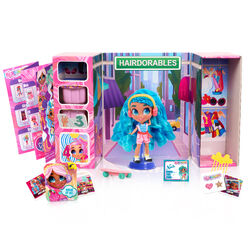